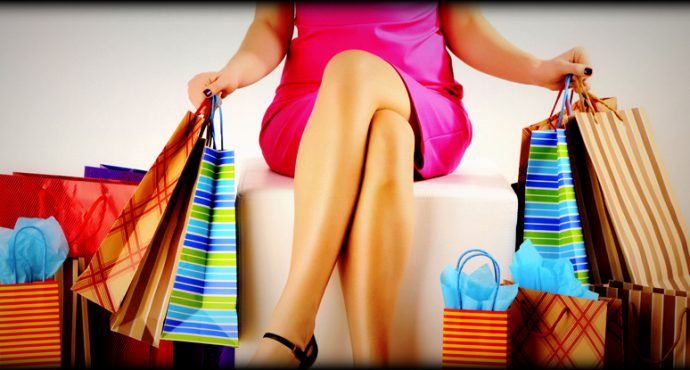 “I have been shopping all of my life and yet, I still have nothing to wear” –Every Woman Ever

It has been said and widely believed that when it comes to shopping, men go to malls and shops to buy what they want while women do the same to find out what they want. From this perspective, it can be readily seen that shopping is largely a woman thing, and you would be quite hard-pressed to find a woman who does not have at least the slightest inclination for indulging her purchasing desires. Indeed, nothing ensnares and entices a woman’s senses more than a shopping mall blatantly proclaiming that they are on a mall-wide sale. Much like a trained bargain hunter, females would descend to malls in droves and would be immediately ready to sniff out the best deals in a matter of minutes.

While some males cannot even begin to fathom the fascination of sifting through items, looking for deals and discounts for hours at a time, most women thrive on them. And malls did quite well to exploit on that fact which is why for this reason, mall sales would profit most from the fairer sex. However, what is it about shopping that drives most women wild and encourages them to go on a frenetic spree of acquiring things of all sorts? Where does this innate proclivity come from? Regardless of whether they are purchasing wholesale clothing or retail, it is no question that women would be there—especially during sales and with their wallets and credit cards at the ready. So, if you have been wondering what inspires this intrinsic behavior from the most of us, here are some of the reasons we have unveiled below:

While jealousy or peer pressure is not two reasons for shopping prevalent among women, it can play a significant role in influencing their decision of whether to shop or not. The truth is when a well-dressed and attractive woman walks down the alley; it is not only the men that take notice but women as well. In fact, you can probably bet that the woman has already dissected every inch of her outfit and is dying to know where she got them. One of the initial things a woman takes note and observes in another woman is her outfit and then her footwear. All the rest such as her hairstyle, makeup and the rest would come second. In this regard, a woman would feel compelled (or encouraged) to dress better and if a woman has better-dressed friends, it is safe to assume that she would want to be even more impeccably dressed than them.

Although most women largely dress for themselves (and none of them would ever care to admit this next fact), some women dress to impress men. They are not proud of it, but making a lasting impact on the opposite sex would also motivate a woman to dress her best. With this in consideration, women would be impelled to shop for better-looking clothes. Although it is not something that they would ever probably admit, women do love getting compliments—especially when it comes from men. Being noticed and flattered because of your style would go a long way to boost a woman’s self-confidence after all.

If a woman has gone through a rather harrowing ordeal or a traumatic event such as a breakup, loss of a job or pet, she would need to take her mind off the stressor. In doing so, she would need to distract herself from what is currently ailing her and one excellent avenue for distraction is shopping. In fact, some women would even swear by the adage that shopping is much cheaper than seeing their therapists. Plus, they get a dress out of it too! Picking out things they love and trying out clothes that look great on them is a way of indulging themselves. In a sense, it gives them a rush of excitement and euphoria. And at least for that moment, they can forget anything that might have caused them despondence and suffering. After all, to most women, even the tiniest trinket can serve as a balm to their pain.

4.) Always confused about her clothing

More often than not, you would hear a woman protest that she has nothing to wear while possessing a closet filled to the brim with clothes. It might be something of a paradox and to most, a woman’s thirst for more sartorial items despite having a complete arsenal of one would be an enigma, but it is a reality. The truth is, some women are just confused about her clothing and may not exactly be happy with what she is wearing. At times, she would be dissatisfied with her ensemble and would feel prompted to make better sartorial choices. She may have a myriad of clothes and shoes of every variety possible, but as she would always want to dress her best, she would do more shopping whenever she can.

While killing time in this manner does not exactly bode well for your credit card as well as your finances, there is no denying that some women would do it out of boredom. However, do know that women do not necessarily have to buy anything just to have a good time and she would hardly need the company of another person. She can simply walk into a retail shop, stroll around, try on stuff and simply just do window shopping. If she sees anything that she likes, she may either buy it or make a mental note of it to buy soon.

Indeed, while a woman’s penchant for shopping remains as an enigmatic wonder, perhaps the reasons given above would give you an insight as to why they love it so much. After all, women are not called the fairer sex for anything, they have to live up to that fact and earn that title each and every day of their lives. In order to do so, they must continue to refine and edit their wardrobes and acquire those that would put them in the best light possible. And because of that, shopping is not only an activity or hobby to them but a lifestyle.